View from the Audience: Ithaca Jazz Ensemble and Terell Stafford

Posted on December 9, 2012 by Why must you use all the notes 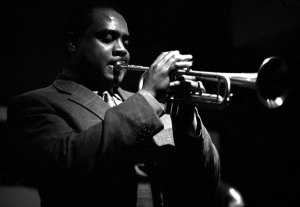 Normally he doesn’t look this chill

So I just happened to be in Ithaca, New York for about a day or so (one of the most beautiful areas of the earth if you ask me) and I noticed that the Ithaca Jazz ensemble was playing a gig with trumpet god (yes, god) Terell Stafford. I’d seen Stafford play before at the University of New Hampshire, so I knew how much I needed to see this show. To put it nicely he played the balls off his trumpet.

I’m not going to do a run down through the program, mostly because my memory won’t let me. Frank Ticheli was in Ithaca for a few days before hand, and I’m hitting myself for not missing another day of school and going to see him conduct his works, and he was saying how much he loved the students at Ithaca. I think I do too. Their playing was excellent, at times overpowered by the mic’d Stafford, but whatever. It was very evident that everyone was having a real great time, audience included. As I alluded to earlier, Terell played the balls of his trumpet, playing nasty fast licks smoother than a babies-buttocks, screaming in the high register, and doing these wicked trills. On one of the tunes he was playing with a plunger and that was just downright filthy. Did I mention balls? It was just raucous in the best way humanly possible. The highlight of the show was definitely the closer Sweet Georgia Brown. It started with this awesome piano solo, that was so Dixie, which was great. I swear I heard a quote from a Christmas song, I couldn’t tell you which one, and my dad didn’t hear it. Maybe I’m crazy, but whatever. The band sung the first chorus, which was cool. By far the best part were the solos by Stafford and the band’s director. At one point they started doing this trading thing and it was so great. The funniest thing about the whole gig was the way the trumpet players in the band would stare at Terell every time he played. That was great.

In conclusion: If you haven’t heard Terell Stafford play, find a recording of him, literally right now. I’ll help you out. You’re very welcome.

So much to do, so little reason to do so much of it...
View all posts by Why must you use all the notes →
This entry was posted in A view from the audience, Jazz and tagged Audience, Awesome, Ithaca, Jazz, Terell Stafford, trumpet. Bookmark the permalink.

1 Response to View from the Audience: Ithaca Jazz Ensemble and Terell Stafford