View from the Audience: Cleveland Orchestra

Posted on February 9, 2013 by Why must you use all the notes 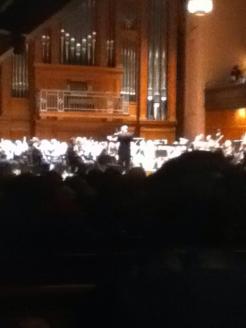 I was at Oberlin College for an interview to get into the composition program, and when I saw that the CO was going to be there I freaked out. Oh yeah the tickets were $10, so that was great. It wasn’t Welser-Most conducting, but whatever. I was sitting next to a friendly gay vocalist, and we had a nice talk about music and whatnot, and that was nice, talking to someone who shared my love of classical music.

The program opened with Rachmaninoff’s “Isle of the Dead.” I’ll be completely honest, until last night I don’t think I had ever heard any of his music (don’t hate me). Judging by the program notes, this work wasn’t exactly in the same style as most of his works. It didn’t matter, I thought the piece was magnificent, as well as the performance. The climaxes were explosive, and the mysterious opening caught the atmosphere perfectly. Next on the program was a trombone concerto by film composer Nino Rota, who wrote the music for the Godfather film, which I have not seen (don’t hate me). The soloist was principal trombone Massimo La Rosa. The work wasn’t a showy virtuoso work with tons of fast runs. It was very lyrical and melodic, especially the slow movement (interestingly marked Lento ben ritmato, slow and rhythmic). The only part that sounded like film music was the opening of the last movement. Overall, the piece was joyous and fun, and La Rosa played splendidly, and earned  the ovation he got from both the players and the audience.

The second half of the program was Prokofiev 6. The opening few measures startled me, with harsh staccato hits from the brass. I had never heard the piece before, so I had nothing to expect. All of the high points were made very dramatic. In the program notes, it compared the work to Shostakovich’s 8th, in the sense they were less optimistic war symphonies and had a darker tone than the ones that came before. Note: Shostakovich, in this case came first, so to all the people who say, “Shostakovich just copied Prokofiev”: Suck it. I had some trouble following the organization of some parts, but I had the same problem when I first heard Mahler, so it will probably grow on me.

Now to the conductor: Gianandrea Noseda. If the name didn’t give it away, he’s Italian. I’d never heard of him before but he’s held some good positions. But that didn’t matter, because I really was not a fan of his conducting. I was a huge fan of the sounds he was able to pull from the orchestra, but the means… He spent most of the time looking painfully stiff, or as if he was placing a heavy block onto a shelve which he could just reach. At a few points in the Rachmaninoff, he actually was airborne, however not at the climaxes, but a few beats before. If there was one thing I did like was that he used his whole body, even if in a way that I wasn’t a fan of. But it didn’t matter. It was the great Cleveland Orchestra, and the show was great.

So much to do, so little reason to do so much of it...
View all posts by Why must you use all the notes →
This entry was posted in A view from the audience and tagged conductors, Prokofiev, Rachmaninoff, trombone. Bookmark the permalink.

2 Responses to View from the Audience: Cleveland Orchestra